The decline of civilization will be done by those just doing their jobs. 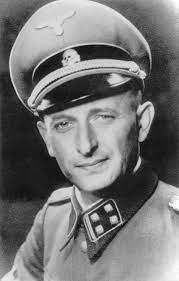 After former Nazi Adolf Eichmann was sentenced to death in 1961 for his role in the Holocaust, he penned a letter to the then president of Israel, Yitzhak Ben-Zvi.

In his letter Eichmann pleaded for pardon on the grounds that he was just doing his job. He wrote, “There is a need to draw a line between the leaders responsible and the people like me forced to serve as mere instruments in the hands of the leaders … I was not a responsible leader and as such do not feel myself guilty.”

He believed he was just following orders.

Hannah Arendt wrote of Eichmann and the Banality of Evil:

“For when I speak of the banality of evil, I do so only on the strictly factual level, pointing to a phenomenon which stared one in the face at the trial. Eichmann was not Iago and not Macbeth, and nothing would have been farther from his mind than to determine with Richard III ‘to prove a villain.’ Except for an extraordinary diligence in looking out for his personal advancement, he had no motives at all… He merely, to put the matter colloquially, never realized what he was doing… It was sheer thoughtlessness—something by no means identical with stupidity—that predisposed him to become one of the greatest criminals of that period. And if this is ‘banal’ and even funny, if with the best will in the world one cannot extract any diabolical or demonic profundity from Eichmann, this is still far from calling it commonplace… That such remoteness from reality and such thoughtlessness can wreak more havoc than all the evil instincts taken together which, perhaps, are inherent in man—that was, in fact, the lesson one could learn in Jerusalem.”

We are heading into dark times, if we’re not already knee deep in them. It is a time when there will be atrocities done in the name of the greater good. Christianity teaches us that Heaven is the greater good and you can’t build it down here no matter how hard you try or how noble you’re ambitions.

Christianity, as always, will become increasingly counter cultural because it teaches that ALL life is sacred. The Church teaches us what you do to your neighbor you do to God Himself. Christianity teaches that there is nothing more important, more precious than the human soul and we should be very careful how we treat our own and others’.

If you’re just following orders, you should make sure it’s the Ten Commandments.