Lord of the Rings Orc Made to Resemble Harvey Weinstein 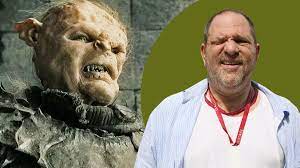 A villain made to look like a villain. I get it.

SlashFilm: “Now this is the kind of pettiness I can get behind. Somewhere in the “Lord of the Rings” trilogy, there’s apparently an Orc whose face bears a very close resemblance to the ugly mug of the convicted sex offender, former film producer, and notoriously self-sabotaging monster Harvey Weinstein. That incredible factoid comes courtesy of THR, reporting actor Elijah Wood’s anecdote from the Armchair Expert podcast and who, in turn, first heard it on Monaghan and Boyd’s “Friendship Onion” podcast with special guest star, Sean Astin. That’s right, folks: Frodo, Merry, Pippin, and Sam all teamed up to bring this vital information to the public and we owe them all a debt of gratitude.

The story of Weinstein’s particular interference with director Peter Jackson and his “Lord of the Rings” passion project is the stuff of legends, as Weinstein happened to be the rights-holder to any filmed adaptation of author J.R.R. Tolkien’s beloved novels. Much has been written about Weinstein’s difficulty and intentional tampering to ensure that making “The Lord of the Rings” would be as painful and torturous as humanely possible when the feud between Weinstein and Jackson came to a head. At a momentous creative crossroad, Jackson was finally allowed to shop “The Lord of the Rings” around to other studios at the last possible minute … but only under an absurdly compressed timeline of two weeks and with the caveat that all three movies be produced simultaneously. Jackson, who was eventually successful in taking the suddenly at-risk production to New Line Cinema instead of Miramax, clearly didn’t appreciate these strong-arm tactics that set himself up to fail.

As Wood tells it, Jackson and his team didn’t take this sitting down:

“It’s funny, this was recently spoken about because Dom [Monaghan] and Bill [Boyd] have a podcast, The Friendship Onion. They were talking to Sean Astin about his first memory of getting to New Zealand. He had seen these Orc masks. And one of the Orc masks — and I remember this vividly — was designed to look like Harvey Weinstein as a sort of a f*** you.”

“I think that is okay to talk about now, the guy is fing incarcerated. F him.”

Me again: I’ve read that Hitchcock made Raymond Burr resemble his former producer David O. Selznick in Rear Window so there’s precedent for this.

So all sorts of people with a great deal of time on their hands have watched and rewatched the movies in order to spot the orc made to resemble Harvey Weinstein. So far, this looks like the best candidate: