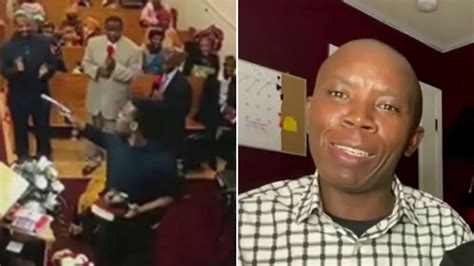 This pastor put himself at risk for his flock. Pretty awesome. Heroic stuff in an age where heroism is tough to come by.

Now, on a side note if you watch the video, the guy who intrigues me most of all is the guy in the front row who never stops clapping along with the music. I mean, this guy claps and sways while this maniac stands up waving a gun around. But the moment the pastor tackles him he jumps in. Dude was really into that music.

NBC:
The swift intervention of a Tennessee pastor helped save a congregation after a man pulled out a gun during Sunday service in a frightening scene caught on surveillance video.

The pastor tackled the gunman at the Nashville Light Mission Pentecostal Church after the man told everyone to get up and pointed the weapon at the congregation from the altar.

Police identified the man as Dezire Baganda, 26, and he has been charged with 15 counts of felony aggravated assault, NBC affiliate WSMV reported.