I Think He Meant to Threaten “Mostly Peaceful Bloodshed.” 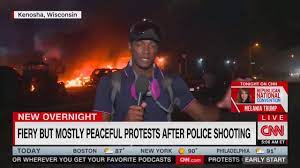 NYC Mayor Elect Eric Adams, a former NYPD captain, met with BLM leader Hawk Newsome to discuss his plan to reinstate a revamped version of the undercover units, which were dissolved amid local BLM protests sparked by the police killing of George Floyd in Minneapolis.

Afterward, Newsome said, “If they think they are going back to the old ways of policing, then we’re going to take to the streets again.”

The interesting thing here is how little attention this has received in the mainstream media. Sure Fox News and the New York Post covered it but outside of social media this received crickets for the most part.

We live in a time where we’re constantly talking about violence and how the country is tearing apart. The 1/6 protest has been portrayed as the most violent insurrection since the Civil War. But a leader of BLM vows bloodshed if police don’t stand down and it’s ignored? That’s not just media malpractice. It’s dangerous.

The one good takeaway is that we are still about to make an end run around the media and promulgate this sort of news without the mainstream.

That’s the good news. The bad news is that we are in a bubble. It’s not like the leftist bubble that they’ve locked from the inside. Our bubble is locked from the outside. We can promulgate news to one another but have very little reach out to those who don’t already agree with us.

One of the worst parts about this is that so many will never get to enjoy my humor. Poor hapless creatures. But the other worst part is that it makes illumination and evangelization difficult.

We are considered too dangerous to be allowed to post freely on any and all topics. We are either shadow banned or banned altogether. When my novel “American Antigone” came out Facebook prohibited all ads about the book because part of the story involved culture of life issues.

We are ghettoed against our will. This will only make the chances of our country ever healing increasingly improbable.

Without means to reach others we must pray for a peaceful resolution to this mess. There is no other way now. Pray unceasingly.