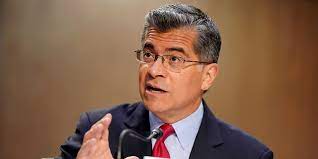 I don’t allow my kids to decide what to watch on television but the federal government says they can choose to have a sex change operation.

They can’t get a tattoo or drink or vote but they can mutilate their bodies in the cause of political correctness?

President Joe Biden’s Secretary of Health and Human Services, Xavier Becerra, told a Senate committee Wednesday that children should decide for themselves if they want a sex change operation.

Becerra was pressed by Republican Indiana Sen. Mike Braun on the Biden administration’s endorsement of “gender-affirming” care for gender-questioning minors, which includes the prescription of puberty blockers, hormone therapy and sex changes surgeries. Braun asked Becerra in what case would it be appropriate to perform irreversible sex change surgery on kids.

“Those decisions are made by that individual, in consultation with a physician, and caregivers, and no decision would be made without having consulted appropriately,” Becerra answered.

They don’t care about your kids but they hate you. That’s enough to keep them going.