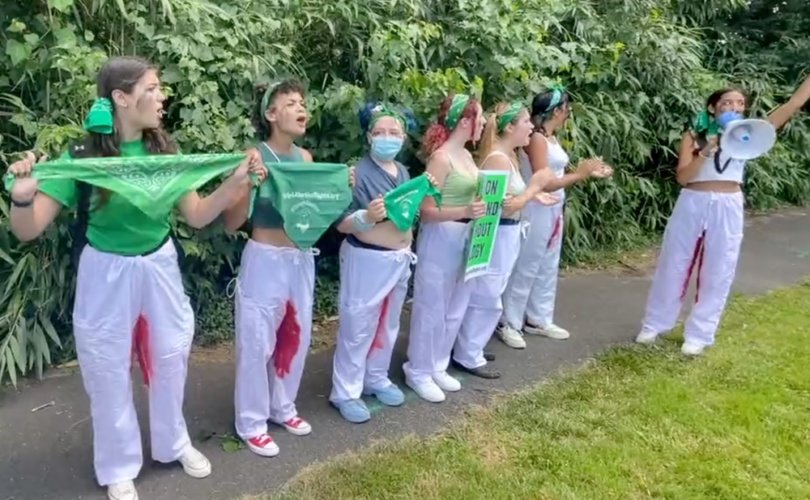 Wait. I get the blood soaked clothes and all.

But why the baby dolls?

Aren’t they supposed to be denying that it’s a baby in the womb? Seems like they hadn’t thought this one all the way through.

Back to Soros University with these protesters. They need a little more guidance.

Pro-abortion activists wearing clothing drenched with fake blood rallied outside the home of pro-life U.S. Supreme Court Justice Amy Coney Barrett over the weekend to protest the potential overturning of Roe v. Wade, which established a constitutional “right to abortion” throughout all 50 states.

Abortion proponents with the group Rise Up 4 Abortion Rights had gathered outside the justice’s home on Saturday wearing white clothes soaked with what appeared to be fake blood, Townhall reported.

According to the report, the protesters drenched their clothes in the red dye to represent “an increase in the number of forced births that would take place if Roe v. Wade was overturned.”

The activists, some of whom covered their faces in makeup to look as though they had been victims of violence, also held up signs that read “Abortion on demand and without apology” and “Overturn Roe? Hell no!”

Participants in the protest also taped baby dolls to their hands, chanted “rise up for abortion,” and argued that the “American nightmare is forcing women to give birth.”

Justice Barrett has seven children. This is pretty disgusting for little children to view. Well, to be fair, I guess I can’t really complain that they’re not caring enough about children when they’re literally promoting the death of children. So, to be fair, that’s pretty consistent. They couldn’t care less about children.

This may get much worse in coming days when the US Supreme Court actually delivers its decision.

A group calling themselves Jane’s Revenge is already calling for a “night of rage” if Roe is overturned.