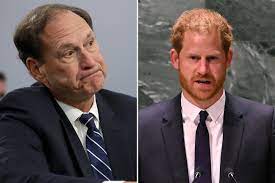 Pretty funny. He also took a shot at Boris Johnson.

The one thing the left can’t stand is being mocked and made to feel irrelevant. Alito does both here. Good for him.

Yahoo: Supreme Court Justice Samuel Alito for the first time publicly addressed critics of his landmark opinion overturning Roe v. Wade, using a speech in Italy to make light of Britain’s Prince Harry and other foreign figures who have lamented the rollback of U.S. protections for abortion.

Prince Harry had referenced “the rolling back of constitutional rights here in the U.S.” as well as war in Ukraine as examples of why 2022 is “a painful year in a painful decade,” during a speech July 18 in New York.

“I had the honor this term of writing I think the only Supreme Court decision in the history of that institution that has been lambasted by a whole string of foreign leaders who felt perfectly fine commenting on American law,” he said. “One of these was former Prime Minister Boris Johnson, but he paid the price.”

Alito appeared to reference Johnson’s recent resignation after a series of scandals in office.

More of this please.