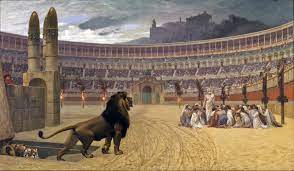 This video will not be seen pretty much anywhere outside of LifeSiteNews, here, and a few other places. Thanks for John Henry Westen for putting it up originally.

Fulani terrorists in Nigeria use sticks and canes to beat their innocent hostages who have been In captivity since March 28. The Nigerian government has refused to pay for their release, and are allegedly preventing families from paying their ransom.

Nothing will be done because it is merely Christians being savaged and that means it’s not that bad because Christians are oppressors so when some group persecutes Christians it’s just kinda’ payback for Galileo or something.

This kind of persecution is what Christians face all over the globe including Africa, India, China, and the Middle East. It is THE most under reported story in the world.

And the West is doing everything it can to catch up to the rest of the world.