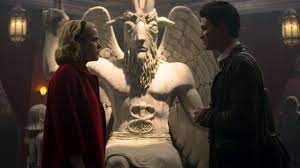 When we reject Christ, we embrace all sorts of villainy and evil. Paganism and the occult are on the rise throughout western civilization.

The Blaze: Eleven adults in Scotland have been arrested and charged with various horrific crimes related to a so-called “paedo ring” that they allegedly ran for 10 years.

The indictment claims that, at various times, six of the defendants shoved the younger female “into a microwave oven, an oven, a fridge, a freezer and cupboards including a cupboard containing an electricity meter.” They also supposedly hanged the girl on a hook by her sweater.

All eleven have been accused of repeatedly raping all three children. During some of the sexual assaults, other defendants would supposedly “clap, cheer and verbally encourage” as they filmed the rapes. At least two of the adults also allegedly engaged in sexual acts in front of the children.

Aside from the sexual assault charges, the defendants have also been accused of forcing the children to participate in satanic “seances” and compelling them to “use a Ouija board … to call on spirits and demons.” The children were also supposedly made to watch “classes involving witchcraft, point wands and utter spells thus causing them to believe that they could levitate.”