Hmmm. You Think Any of These Are Linked? 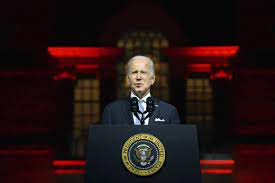 Hey, remember when James Hodgkinson opened fire on a baseball team of Republicans.

Hey, remember that random SUV that ran over participants in a Christmas parade?

How about all those crisis pregnancy centers that were vandalized and/or torched?

How about this week’s entry, where a leftist ran over and killed a teenager precisely because the kid was a Republican.

These are all lone wolves. These crimes aren’t connected at all.

Rhetoric like this from brain dead Brandon doesn’t impact people at all:

“Donald Trump and the Maga Republicans represent an extremism that threatens the very foundations of our Republic” . . . “MAGA Republicans pose a clear and present danger” . . .“It’s in our hands, yours and mine, to stop the assault on American democracy”

Please notice how the media doesn’t connect any of these.

I haven’t even brought up the Las Vegas shooter who opened fire on a field filled with country music fans. His motive remains a mystery.

The media has followed right along.

The Washington Post: “Biden’s stark warning: The U.S. is threatened by its own citizens”

The Hill: “Biden was right: MAGA ideology is fascism”

And you might recall Newsweek’s sad attempt to link the rosary to AR-15’s.

What could go wrong with the administration and the media making people fearful of others and then running cover for those who act violently towards them?

The government is no longer for the people by the people. It’s some of the people vs. the others. We increasingly live in a tiered system. Guess who’s at the bottom? Psst. Spoiler alert: Christians. Pro-lifers.

And despite that reality not reflected by the media, many people know it.