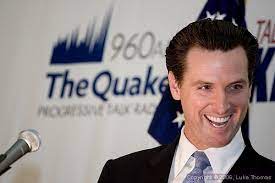 They might. Up to 28 days after a baby is born, it might be legal to kill a child in California. I do wonder if it will be legal for men to kill a child after they’re born or does that “right” solely belong to women? What if the dad decides he’s a woman, can he then kill the child as well?

Just to be clear, we’re not talking about some loophole here. This is the intent of their language in the bill. Remember, that wackadoo Northam in Virginia who clearly stated that a mother and a physician had to discuss what to do with a child after it was born.

Kept comfortable? By being ignored. And then a discussion. What would that discussion entail?

So exactly when does a baby become a human person anyway, according to leftists? Maybe only when they start voting for Democrats? Actually, they don’t even need you alive for that anymore.

This comes down to two world views. Do you consider human life sacred or your ability to not be inconvenienced by other human beings sacred?

I’m reminded here of Jean Paul Sartre’s “Hell is other people” quote. Except Sartre reportedly became a Christian at the end of his life.

Townhall: In a recent letter addressed to Newsom, bill AB 2223 will change a California law “in a way that radically undermines protection for newborns,” and if signed, “will allow certain forms of infanticide.”

Introduced by Assembly member Buffy Wicks, the proposed bill would do away with its current infanticide law which makes it a crime to kill a baby that was born within a year.

If Newsom goes ahead and signs into a law, the bill would erase the requirement for a county coroner to hold inquests to investigate perinatal deaths “related to or following known or suspected self-induced or criminal abortion.”

It would also bill “delete the requirement” for a coroner to handle “an unattended fetal death” as a “death without medical attendance.”

Doing away with this law would also protect those responsible if a baby was left to die after a failed abortion, meaning it could effectively legalize infanticide up to twenty-eight days after the baby is born for any reason.