I Don’t Get the Strong Reaction to Nancy Pelosi Stepping Down. 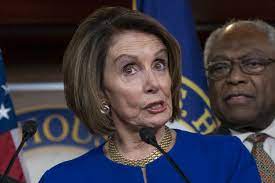 Lots of folks are out there celebrating Nancy Pelosi announcing her intention to step down from leadership.

The good news here is that Republicans will have the House. They will do nothing with it but at least they can stop some of the madness coming from the executive branch and the Senate.

But Nancy Pelosi is not an individual. She is a cog in the leftist machine. She is replaceable. The left is like The Borg from Star Trek.

The Borg are cybernetic organisms (cyborgs) linked in a hive mind called “the Collective.” The Borg co-opt others and assimilate them into the Collective, forcibly transforming individual beings into “drones.”

That is the Democrat Party today. They are a hive mind, all acting for the furtherance of their secular leftist cause.

I’m glad to see Nancy Pelosi gone, don’t get me wrong. But it just doesn’t matter who is in her place. Just as Joe Biden is the president.

It doesn’t matter who the actual president is. The left is in control. The Borg has control over the executive branch, the media, and academia.

Individual personalities don’t matter. What happens when Joe Manchin or Tulsi Gabbard step out of line?

So yeah, Nancy Pelosi is done. But it means nothing for our country. I actually just hope and pray that without her grip on the reins of power, maybe she will turn to her faith. Maybe?

Here’s a story about Nancy Pelosi that, I think is telling.

Republican Congressman Tom Marino accused Pelosi from the floor of not doing her research. Pelosi charged toward Marino in a rage “enraged, pointing and sticking her finger in Marino’s face,” ABC News reported at the time.

Others literally had to stand between her and Marino. When she couldn’t physically reach Marino she spouted out the worst insult she could think of. She called him an “Insignificant person.”

That was the worst she could think of.

That is very telling. Helps to understand her view of abortion, doesn’t it? There are two classes of people, according to the Borg. Significant and insignificant.

Maybe retiring into insignificance will be a good thing for her. I hope so.