Sen. Tom Cotton Badassery with Woke CEO is a Must See. 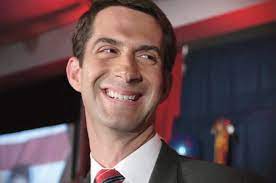 So here’s the background. Kroger announced in October plans to acquire Albertsons for $24.6 billion, according to The Blaze.

Krogers is the wokiest wokies ever and this merger will make them yuuuuuuuuge. Some Democrats are concerned about Krogers becoming essentially a food monopoly so they’re considering putting a stop to the acquisition. So the CEO of Krogers is up on Capitol Hill, looking to build support.

The VERY WOKE ceo thinks Republicans will side with the free market like they always do but Senator Tom Cotton put a little “Whoa” in his “giddy-up.”

Cotton points out that Kroger canned two Christian employees that refused to wear a rainbow heart apron. Fired them. These two Christians won a lawsuit against the company. When Cotton raised this to the Captain Wokepants, he said he hadn’t even heard of the lawsuit. (Seems like a pretty horrible CEO that doesn’t even know he got sued by the EEOC and lost but that’s neither here nor there.)

Krogers, under this asshat’s leadership, has also instructed workers never to say the words “Sir” or “Mam” because they want to be inclusive.

So Cotton wonders how “inclusive” Krogers can be when it fired two Christians for refusing to wear the rainbow heart on their apron.

He makes it clear the guy mental infant in the CEO suit in front of him is either lying or incompetent. (Maybe both!)

In the end, he drops this:

“This situation reminds me a little bit of the situation Big Tech companies have found themselves in. … They come to Washington because they fear regulation from our Democratic friends or action by the Biden administration, and they expect Republicans, who are traditionally more supportive of free enterprise, to come to their defense,” Cotton said.

“I’ve cautioned them for years that if they silence conservatives and center-right voters … if they discriminated against them in their company, they probably shouldn’t come and ask Republican senators to carry the water for them whenever our Democratic friends want to regulate them or block their mergers,” he continued.

After explaining that he knows Democrats will highly scrutinize Kroger’s acquisition, Cotton then dropped the mic.

“I’ll say this: I’m sorry that’s happening to you. Best of luck,” he said.

This is the DC equivalent of Ivan Drago saying:

I like to see this. Why allow this Christian hating company that enforces wokeness on its employees to expand further and further and becoming increasingly powerful? I know. I know. We should support the free market, say the libertarians ins and the Chamber of Commerce wing of the GOP.