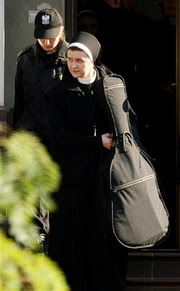 Polish Police evicted 65 rebellious ex-nuns Wednesday from a convent they illegally occupied for two years after defying a Vatican order to replace their mother superior, a charismatic leader who had religious visions.

The defeated nuns walked out in their black habits — some carrying guitars, drums and tambourines — after a locksmith opened the gate to the walled compound and police in riot gear rushed in and arrested the mother superior.

I say lock them up just for the guitars, drums and tambourines. No word yet if neighbors complained of the Kumbaya-ing too loudly into the wee hours of the morning but I’ll investigate.