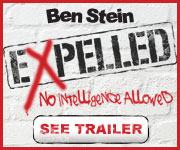 I had the opportunity recently to preview Expelled: No Intelligence Allowed, the forthcoming movie made by Ben Stein, best known for his game show “Win Ben Stein’s Money” and for being the teacher in ‘Ferris Beuller’s Day Off” who kept asking “Anyone? Anyone?”. There has been very little press so far about the movie, which is expected to open in theaters next month, but it does for free scientific inquiry and intelligent design what Al Gore did for global warming in “An Inconvenient Truth.” Shot in the form of a documentary, the movie is filled with Ben Stein’s usual deadpan wit, but it is also deadly serious. Its tone is a bit cheeky, and it will certainly make some viewers highly irritated. We were asked not reveal any of the contents of the movie, so the link to the trailer at the left will have to speak for itself. Suffice it to say, it is a brilliant tour de force which is witty, entertaining, provocative and right. This movie deserves tremendous support on opening weekend.