Backlash: The Islamicization of Europe 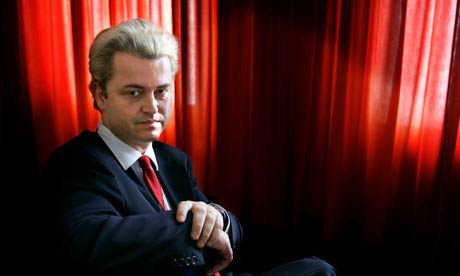 A Dutch politician, whose life expectancy is likely greatly diminished, has lashed out at Islam in a way that we don’t usually hear from politicians. “‘Islam is not a religion, it’s an ideology, the ideology of a retarded culture.’

Geert Wilders, who is the latest non-conformist from Holland and one of the only ones who is not dead or in hiding. Wilders says the kind of things that you just do not expect to hear from European politicians.

[Guardian]The Dutch politician, who sees himself as heir to a recent string of assassinated or hounded mavericks who have turned Holland upside down, has been doing a crash course in Koranic study. Likening the Islamic sacred text to Hitler’s Mein Kampf, he wants the ‘fascist Koran’ outlawed in Holland, the constitution rewritten to make that possible, all immigration from Muslim countries halted, Muslim immigrants paid to leave and all Muslim ‘criminals’ stripped of Dutch citizenship and deported ‘back where they came from’. But he has nothing against Muslims. ‘I have a problem with Islamic tradition, culture, ideology. Not with Muslim people.’

I am glad he does not have a problem with Muslims or who knows what he would say. Well, we might find out. Wilders is putting the finishing touches on a ten minute film that is the result of his study of Islam and the Koran and is in discussions with the Dutch networks about airing it. Like I said, his life expectancy is getting shorter very rapidly. Remember Theo van Gogh.

On another note, Muslims in Gaza determined to show Mr. Wilders how wildly off-base he is about Islam, burned down a YMCA library. Not just a random act of vandalism or arson, they stole everything from the library that wasn’t nailed down first leaving only the Christian books to burn.

“This missionary activity is endangering the entire Christian community in Gaza,” Abu Saqer said. He said Hamas “must work to impose an Islamic rule or it will lose the authority it has and the will of the people.”

Well, Mr. Wilders, it appears that the feeling is mutual.