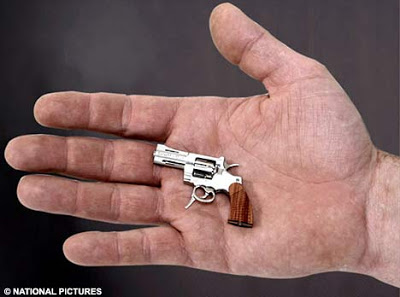 I’ve read many times that one day cockroaches will take over the world. And I laughed and laughed because they don’t even have guns, planes or tanks.
But guess what some idiot from wherever the Swiss are from just did.
The Daily Mail introduces the world to the smallest gun that fires deadly 300mph bullets – but is just TWO inches long. In short, they just armed the damn roaches. Now we’ve got a fight on our hands.

The SwissMiniGun is the size of a key but powerful enough to kill at close range. Hey guys, the first rule of civilization is “You Don’t Arm the Enemy!”

I say we take the battle to them. Viva La Humanity. My sister lives in New York City. I bet she’s got roaches. I’m going there before the arms shipments get to the roaches. Wish me luck. If I don’t post something stupid again in a few days count me as one of the brave and fallen. God speed. And no matter what don’t pay the ransom.