A Heartbreaking Story About Motherhood and Love 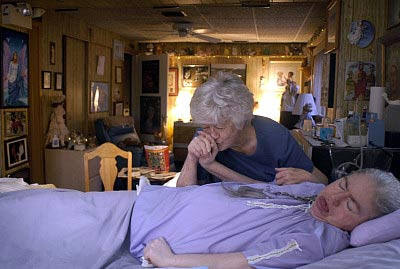 I was feeling sorry for myself tonight. Money troubles. As always. Leaky roof -only when it rains. Kid troubles. Typical stuff. I felt pretty down. I felt kind of like God gives good times and then he comes along and tests you a little bit. Well tonight I was feeling tested. And then I read this:

“Mommy, don’t ever leave me,” the frightened teenager implored her mother just before she slipped into a diabetic coma.

“I will never leave you,” her mother replied.

That was in 1970. And, although Edwarda O’Bara never regained consciousness, her mom kept the promise.

With only an occasional short break, Kaye O’Bara remained by her daughter’s side at their home in Miami until she died Thursday at 79.

A native of Johnstown, the former Kathryn McCloskey was the daughter of Eddie McCloskey, the city’s mayor from 1931-35.

She married Joe O’Bara, a football star at Pitt and a Navy boxing champion.

Both were teachers until she quit work to care for her daughter.

Mr. O’Bara assisted with his daughter’s care until he died suddenly of a heart attack at 50.

Although it required round-the-clock work, Mrs. O’Bara never considered her daughter’s care a burden – referring to it as an honor.

Many suggested she put her daughter in a nursing home, where care would be paid for by the government, but Mrs. O’Bara steadfastly refused.

She had made a promise and she intended to keep it.

And by all accounts, no one could have done a better job than the devoted mother.

Every two hours, she fed her daughter through a tube. She checked her blood sugar, gave insulin shots, emptied urine bags, changed diaper pads, bathed and turned her around the clock.

She was so dedicated that her daughter never had a bed sore.

“Aunt Kaye hadn’t had eight hours sleep in over 30 years,” said her niece, Melodee Guy of Johnstown. “She used to sit in a chair by her bed.

“She had an arched back because she was always leaning over (her daughter).”

She read to her daughter, fixed her hair and rubbed sugarless Popsicles on her lips – and she never gave up hope that one day she would awaken.

“She was delight to be around,” her niece said. “She had a positive attitude as long as I had known her.”

Ms. Guy doesn’t know who will care for her cousin now.

Although the medical bills were insurmountable, Mrs. O’Bara kept her strong faith in God.

A devout Roman Catholic, she believed her daughter’s suffering was an inspiration to others.

Author and self-help guru Wayne Dyer wrote a book, “A Promise is a Promise,” based on Mrs. O’Bara and her daughter.

The story, which also was written in numerous news accounts, drew thousands of visitors yearly to the O’Bara’s humble home.

People came from all over the U.S. and from many foreign countries.

The poor and the humble found a warm welcome as did the rich and famous. Visitors included Florida Gov. Jeb Bush and former President Bill Clinton.

On her Web page, the humble woman described herself as “Kaye O’Bara, mother and guardian of a precious soul.”

In addition to her daughter, she is survived by another daughter, Colleen O’Bara of Miami, a grandson and a great-grandson.

Mrs. O’Bara will be buried Thursday.

You can read more about Mrs. O’Bara at her website.