Didn’t He Say No to a Flag Pin? 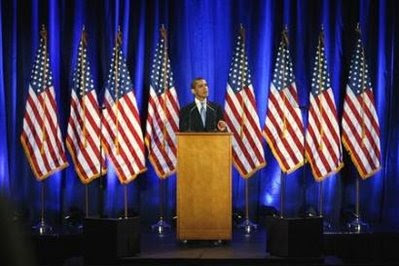 Remember, Obama bravely refused to wear a flag pin and the media hailed him as a hero. The Illinois senator explained months ago that he no longer wears such a pin, at least in part, because of the Iraq War.

“You know, the truth is that right after 9/11, I had a pin,” Obama said. “Shortly after 9/11, particularly because as we’re talking about the Iraq War, that became a substitute for I think true patriotism, which is speaking out on issues that are of importance to our national security, I decided I won’t wear that pin on my chest.

But insert trouble into the campaign and the flags come out of storage. This is Obama during his “race speech.”