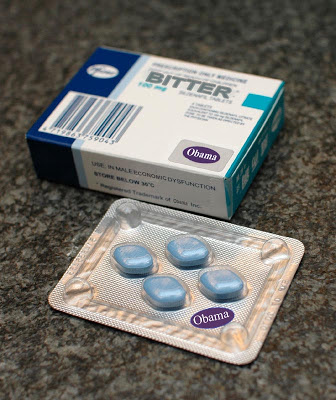 Have you ever suffered from Male Economic Dysfunction?

Are you frustrated because economic conditions in your small town have not improved?

Do you find yourself waking up in the middle of the night with a bible in one hand and a gun in the other?

Have you found yourself irrationally lashing out at recent immigrants just because they don’t look like you?

Have you soured on the idea of free-trade?

Well, you are not alone! You, and millions like you, suffer from a condition known as

Fortunately, now there is help! You don’t have to suffer anymore.

So if you suspect that you might be a bitter bumpkin, vote for Barack Obama!

***Warning*** Possible side effects of Obama’s Bitter Pill™ include, but are not limited to elitism, snobbery, disdain for your own country, flag pin repulsion, higher taxes, prolonged recession, loss of freedoms, legal infanticide, and complete surrender of sovereignty.

***Note*** Obama’s Bitter Pill™ not currently available in any major American cities but can be readily found at your local country store and at a Walmart near you.