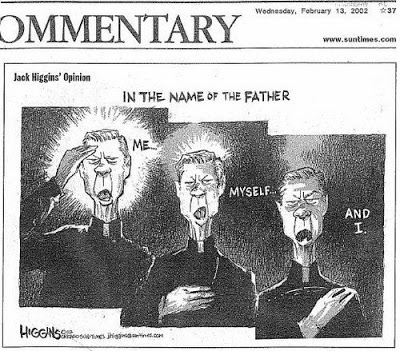 The Rev. Pfleger has been embarrassing himself locally for years. And check out Jill Stanek (who has picketed Pfleger’s church for hosting the Rev. Al Sharpton at the church) to see a rundown of Pfleger’s litany of ridiculous comments including one public comment to his bishop: “I am not quitting…You are going to have to have the balls to fire me.” That’s nice from a priest, isn’t it?

Chicago Sun-Times religion reporter Mike Thomas asked Cardinal Francis George’s office for a reaction to Pfleger’s recent explosion, and his spokeswoman, Colleen Dolan said, ”The cardinal has made it clear to Father Pfleger in the past on more than one occasion that it’s inappropriate to speak about political issues from the pulpit and that his own personal opinions are his own personal opinions.”

Wow! How about that for a strongly worded statement?

Pfleger is a strong supporter of Louis Farrakhan and has been described as a “spiritual adviser” to Obama. He also publicly threatened the life of a Chicago businessman saying that he should be “snuffed out.” And, according to the Wall Street Journal, Pfleger “is known for climbing ladders to deface liquor billboards.” He also said recently that “America is the greatest sin against God.”

This guy is a lunatic. The Church needs to “snuff him out.” Not literally.