Who Wrote This Letter? 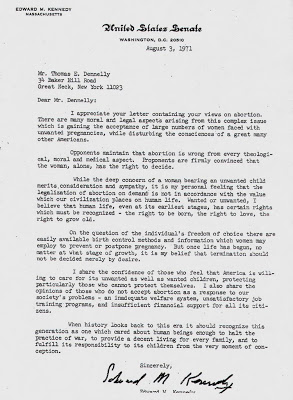 I came across this letter from a well known politician about abortion. It was written some time ago. Perhaps you have seen it before, but I have not. This letter is as amazing as it is sad. That it was written by someone who has since betrayed the very beliefs professed in it mandates a certain mournfulness while at the same time provides a small hope that some modicum of sanity and morality could be resurrected. Pray for it.

I appreciate your letter containing your views on abortion. There are many moral and legal aspects arising from this complex issue which is gaining the acceptance of large numbers of women faced with unwanted pregnancies, while disturbing the consciences of a great many other Americans.

Opponents maintain that abortion is wrong from every theological, moral and medical aspect. proponents are firmly convinced that the woman, alone, has the right to decide.

While the deep concern of a woman bearing an unwanted child merit consideration and sympathy, it is my personal feeling that the legalization of abortion on demand is not in accordance with the value which our civilization places on human life. Wanted or unwanted, I believe that human life, even at its earliest stages, has certain rights which must be recognized – the right to be born, the right to love, the right to grow old.

On the question of the individual’s freedom of choice there are easily available birth control methods and information which women may employ to prevent or postpone pregnancy. But once life has begun, no matter at what stage of growth, it is my belief that termination should not be decided merely by desire.

I share the confidence of those who feel that America is willing to care for its unwanted as well as wanted children, protecting particularly those who cannot protect themselves. I also share the opinions of those who do not accept abortion as a response to our society’ s problem – an inadequate welfare system, unsatisfactory job training programs, and insufficient financial support for all its citizens.

When history looks back to this era it should recognize this generation as one which cared about human beings enough to halt the practice of war, to provide a decent living for every family, and to fulfill its responsibility to its children from the very moment of conception.

If you haven’t seen it before, do you know who wrote it? Click here to find out.