Being Human – Part II
—The Coalition for Life has completed the second episode of Being Human.

The Tiber Swim Team T-shirt
—Come on in. The water’s fine.

Whose Money Is It?
—Charitable deduction for Gov’t approved good cause only!

Remedial Rubrics With Dick and Jane
—General instruction for the simpleton generation.

Kevorkian for Kongress
—Dr. Death runs for congress and we are there to help! 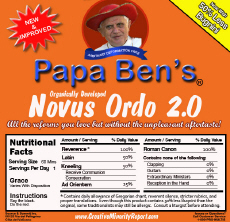