If This Doesn’t Send a Chill Up Your Spine… 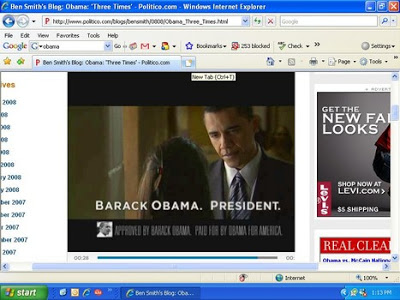 I know this will probably send a thrill up Chris Matthews leg but this photo caption in Obama’s latest presumptuous ad sends a chill up my spine. I have to go pray.

Just thinking about Obama’s comments on religion and abortion makes me shudder to think he could be the President. Lines like:

I’ve got two daughters. 9 years old and 6 years old. I am going to teach them first of all about values and morals. But if they make a mistake, I don’t want them punished with a baby.

Or this one on when life begins:

Well, I think that whether you are looking at it from a theological perspective or a scientific perspective, answering that question with specificity, you know, is above my pay grade.

That’s one of the first things Obama says which I agree with. And then this infamous one on poor people:

“They get bitter, they cling to guns or religion or antipathy to people who aren’t like them or anti-immigrant sentiment or anti-trade sentiment as a way to explain their frustrations.”

So I can’t right now think of any scarier words than “Barack Obama. President.” Can you?

Update: To see a recently unearthed and sickening quote by Obama on how important the life of a baby is, go read Red Cardigan’s post. Be warned, it’s bad.