Save the Straw Men! 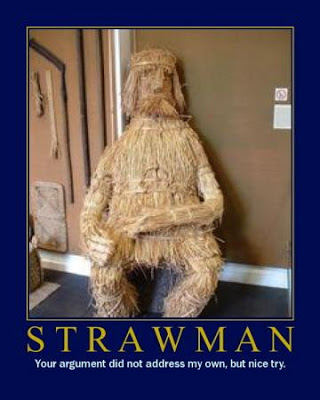 In this heated election season, thousands of straw men have been created with the express purpose of being knocked down, says the spokesperson of a Strawman advocacy organization.

Save the Straw Men was created to raise awareness of the horrors done to straw men who are often created on a whim only to be intentionally knocked down and discarded.

“I don’t get it. These people create us only to knock us down,” said one straw man who was created to further the argument that pro-lifers only want to push religion on others -much like during the Inquisition.

“Nobody even knew what he was talking about,” said the straw man of his creator. “Frankly, I’m disappointed. I mean who would create life just to destroy it?”

Other strawmen created recently include that pro-lifers only care about babies in the womb and shunning them once they’re out, those who don’t want to pay higher taxes are unpatriotic, and if you try to bring up Jeremiah Wright in political discourse you’re attempting to fan the flames of racism.

Straw men all around America who’ve been created and raised with the express purpose of being knocked down are finally organizing. “Veal are treated better than us for goodness sake,” said one straw man who had fallen on hard times after being raised in an argument for the minimum wage.

Even in these enlightened times, the mortality rate of straw men has not decreased and remains at about 100 percent. In fact, the only time straw men survive even for a short time is when the person creating them simply forgets the point they were trying to make.

This election season has seen a drastic increase in the number of straw men created with cable shows centered around thin arguments and bombastic accusations, bloggers arguing with each other in the comboxes, and even candidates intentionally misconstruing each others words.

Straw men are seeking legislation to protect themselves but ironically some politicians actually created more strawmen to argue against the bill by arguing that protecting strawmen might include protecting scarecrows which could hurt farmers and their families.