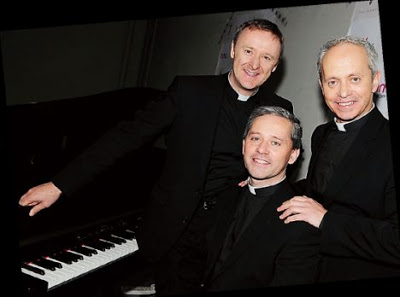 Three Irish priests may be hitting the top of the pops by covering songs like Benedictus, Panis Angelicus and Be Thou My Vision among others, according to the Daily Mail.

They’re celibate, saintly and say they are not in it for the money – but thanks to their vocal talent, a band of brothers is set for superstardom.
As the name may suggest, The Priests are real-life, understated clergymen from Ireland, and yet they have created an unprecedented clamour around their debut album.
Within 24 hours of its release, The Priests’ album had sold a staggering 29,000 copies, and it’s heading for a top position in the charts this weekend in a battle against American rock band Guns N’ Roses, The Killers and last year’s X-Factor runner-up, Rhydian Roberts.

The priests say that no matter how big they get they’ll always wear their collars in public. This will be an interesting story to follow. There’s some videos on Youtube. Really great!