PETA Gives Me a Great Idea! 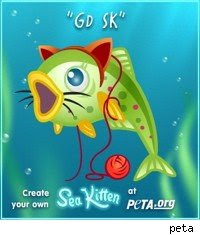 Peta, the animal rights lunatics, are running an ad campaign seeking to change the name of fish to…(wait for it)…sea kittens. I’m not kidding.

People don’t seem to like fish. They’re slithery and slimy, and they have eyes on either side of their pointy little heads—which is weird, to say the least. Plus, the small ones nibble at your feet when you’re swimming, and the big ones—well, the big ones will bite your face off if Jaws is anything to go by.

Of course, if you look at it another way, what all this really means is that fish need to fire their PR guy—stat. Whoever was in charge of creating a positive image for fish needs to go right back to working on the Britney Spears account and leave our scaly little friends alone. You’ve done enough damage, buddy. We’ve got it from here. And we’re going to start by retiring the old name for good. When your name can also be used as a verb that means driving a hook through your head, it’s time for a serious image makeover. And who could possibly want to put a hook through a sea kitten?

OK. I see their point. And this gives me a great idea. A deal, if you will. I’m willing from now on to refer to fish as sea kittens as long as they’re willing to do one little thing for me. Instead of calling those little humans in woman’s wombs a fetus let’s call them…uhm..babies.

I think it makes them a lot harder to kill, don’t you?

Think they’ll go for it?

H/T Sweetness and Light
I got the pic from GreenDaily