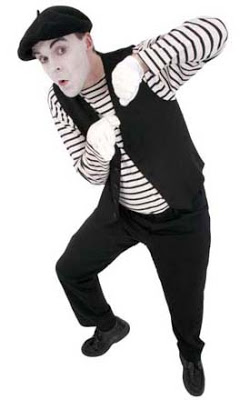 A group of comedians, satirists, and humorists held a press conference today to announce that with the inauguration of Barack Obama that comedy would be drastically different.

Kathy Griffin, Janeane Garafalo, and Bill Maher gathered with even lesser known comedians to say that because George W. Bush is no longer President and Vice President Dick Cheney is gone, there are no political jokes to be made anymore.

Because Obama is President they said they fear that Obama is so perfect in so many ways that his presence simply wipes away all hope of humor.

So the comedians announced they are becoming mimes. The monologues which usually took place before interviews on late night comedy shows will now be acted out in silence with such classics as “I’m Trapped in a Box” or “I’m Trying to Walk but the Wind is Very Strong Against Me.”

Garafalo said those two routines are particularly instructive of the times we’re living in today because we are finally breaking out of the box and we’ve been walking against the wind for eight years.

The press conference was silent in the beginning while the “comedians” attempted to mime their intentions to change their comedy stylings but the media misunderstood, forcing the comedians to “break character” after the EMT’s arrived.

“You don’t understand our brilliance you little brained Fox News acolytes,” screeched Bill Maher at the media. “We’re actually more free now. We’re free to be silent which is one of the rights in the Declaration of Independence, you jerks.” Maher walked off in a huff with Playboy’s Miss August 1989.

Al Franken, who likely will become a Senator soon, said he too doesn’t feel funny anymore. “The hole in my life that I used to fill with humor is now filled with hope,” he said. “And as long as Obama is President I hope to never hear humor again.”
The group said that with the ascension of Obama to the presidency, there are simply no political jokes to be made anymore.