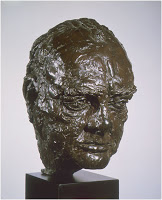 It has been reported that Barack Obama has returned a bust of Winston Churchill to the Brits even though they did not ask for it back. The bust was loaned to the White House in the immediate aftermath of the 9/11 attacks as a demonstration of solidarity with the United States.

So we wondered, why would Obama do such a thing?

10 — We only play nice with dictators and thugs.

9 — It was returned by mistake. Joe Biden thought it was Michael Caine.

7 — Thought it was made of chocolate and would melt in the 85 degree oval office.

6 — Had to make room for trillion dollar taxpayer ATM machine and a teleprompter.

5 — Obama said, “Sorry, I never heard of the guy! Guess they didn’t teach that at my madrassa.”

3 — Returned with the request to send bust of Neville Chamberlain.

2 — Found out Churchill said, “There is no such thing as a good tax.”

1 — Was not aware it opened entrance to the Bat Cave.