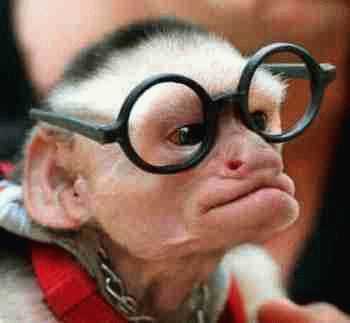 Monkey Business. Don’t scientists ever learn? Certain things should not be monkeyed around with, perhaps like monkeys! Perhaps the “scientists” from these two stories should get together, chat, and then call it a day.

WASHINGTON (Reuters) – Scientists have created a strain of the human AIDS virus able to infect and multiply in monkeys in a step toward testing future vaccines in monkeys before trying them in people, according to a new study.

The anti-HIV ingredient in the gel is glycerol monolaurate or GML. It’s already FDA approved as an ingredient in cosmetics and medicines.

How much you wanna bet that these two scientists work in separate halves of the same lab with a white stripe painted down the middle?

Speaking of messing around with things better left alone, this can certainly not be good news. Hollywood has decided to remake Total Recall and Tron. Why? Why?

Nothing, and I mean nothing good can come of this. Once a master like Ahnold has uttered the immortal phrase, “Get your @ss to Mars!” What more needs to be said?

For an incontrovertible sign that we are all doomed and that the entire food supply of the world has been destroyed by genetic engineering one need look no further than THIS!

Fishes with Faces! Doomed! The The ‘humanoid’ carp are attracting attention in the town of Chongju, South Korea. That must be the town where that crazy Korean cloning doctor lives.

Speaking of crazy cloning doctors, Italian mad scientist, Severino Antinori,claims to have succesfully cloned three babies who are now living in eastern Europe. Further, he claims that he did it a whopping nine years ago.

“I helped give birth to three children with the human cloning technique,” Severino Antinori, a prominent gynaecologist, told Oggi weekly in an interview to appear Wednesday.

“It involved two boys and a girl who are nine years old today. They were born healthy and they are in excellent health now.”

As usual, Antinori provides no proof of his claim. Many doubt him since he originally said the babies were living on the planet Kamino and insisted on being called Boba Fett.

You want signs of the times? Forget the stock market? Forget Depression? You want to know what makes for a deep depression. A giant rock flying at Earth at a bazillion miles an hour, that’s what! A meteor roughly the same size as that which level Tunguska a century ago just missed earth this week.

Dubbed 2009 DD45, it was discovered only on Friday by Australian astronomers.

Forty thousand miles may sound like a lot, but it’s only about one-seventh of the way to the moon, and less than twice as far out as many telecommunications satellites.

When God is taking practices shots at the Earth, I don’t suppose we should be worrying about the Stock Market!

As Europe and its Union strains and cracks under the weight of the economic collapse, the continent looks desperately for a savior. Increasingly, Europeans are looking to one country to save them and that has never ended well. Reuters Paul Taylor writes:

Now Sarkozy has lost much of his European leadership credit by announcing a national car industry rescue plan widely criticized as protectionist, while Brown’s influence has sagged as bad news continues to pile up for the City.

Everyone is turning to Germany as the ultimate savior of the European economy.

Taylor goes on to say “The change of heart also reflects a shift in the balance of power in the EU that puts Germany in the driver’s seat.”

An increasingly desperate and fractious Europe ceding more power to Germany? Not good folks, not good. “In Germany begins a dance, which passeth through Italy, Spain and France, but England shall pay the piper.”

Even though I live in New York and saw the World Trade Center burn, terrorism has always seemed like a far distant threat. That was until I met Ali al-Marri. I read about al-Marri in the news:

An accused Al Qaeda sleeper agent held for 5 1/2 years at a Navy brig in South Carolina will soon be sent to Illinois for trial in civilian court, a move the government has fought for years saying terror suspects caught in the U.S. could be held indefinitely without charges.

But I was not scared until I saw a picture of al-Marri.

The dude has a mullet! A mullet people! The news report reports that he was part of a sleeper cell. Sleeper cell terrorists with mullets? These guys could be anywhere! Now I’m scared. Doomed, I say. Doomed.