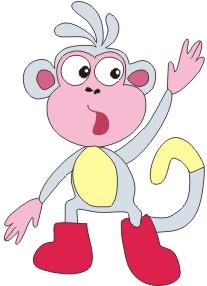 As we’ve all heard President Barack Obama will appear on an unprecedented five Sunday shows as well as others in the coming week in his hard push to sell ObamaCare to the masses.

The move reeks of desperation but one other attempt has many scratching their heads as to Obama’s efforts. It was just announced that Obama will be a very special guest star on “Dora the Explorer” this week. CMR investigators dressed as a pimp and a prostitute and were able to watch a preview of the show and take copious notes. (They didn’t need to dress as a pimp and a prostitute but they’ve got some issues they’re still working out)

These are some excerpts:

Dora y Obama are faced with a very ill Boots, a blue monkey who is a friend of Dora’s, who they need to get to Healthcare City or he’ll be dispatched to “little monkey heaven.”

So Dora y Obama enjoin to set off together to face three obstacles on their way to get the medicine at Healthcare City. Thankfully, they have a trusty backpack with tools and paraphernalia oddly suited for just this type of adventure. And the map inside details that they’ll face three harrowing adventures.

First, the land of giant teabags, then onto The Mountain of the Alaskan Witch Queen, and then the angry screaming troll. A nasty business but not enough to frighten off Obama y Dora. The two sing a song which goes “Come on Vamanos.”

The giant teabags at first appear quite menacing and committed to stopping any healthcare for Boots but Obama y Dora are committed to their quest. Obama reaches into Dora’s backpack and pulls out an old white haired Peanut who bounces about calling all the tea bags racists which seems to dispel them in shame.

Dora y Obama are so delighted with their success that they sing and dance with Dora singing “We did it” and Obama singing in quite beautiful harmony “Si Si Puede!”

And just as we’re about to move on, the unthinkable happens. An odd greedy fox with some kind of vendetta against Dora rushes in and attempts to steal Obama’s teleprompter. Luckily, the two spot the rather slow moving but committed fox and repel him by instructing him about the rule of “no swiping.”

Obama then instructs the greedy fox that it’s only ok to swipe if your intentions are good and you have patronage jobs to fill which demand salaries. But the fox simply says a disappointed “oh man.” Obama explains to the fox for twenty minutes how he can’t let him go back to his selfish ways and urges him to change. As Obama moralizes, suddenly a voice emerges from under a nearby bridge.

It’s the angry troll we’ve been dreading meeting for the first twenty minutes of the show. And he screams at Obama “You lie.” Obama simply shakes his head and says, “that’s not true.”

Even Dora seems frightened to approach this particular troll even though she faces trolls, witches and alligators on a daily basis. Thinking quickly, Obama reaches into Dora’s backpack and pulls out a pack of dinosaurs wearing shirts with the letters MSM on them.

And like a pack of angry velociraptors they descend upon the angry troll sniping and tearing at him. We leave Wilson battling bravely as the camera follows our hero on the path to Healthcare city. From the looks of things that battle will continue on for months.

In the end, Dora y Obama reach their destination at healthcare city but Obama y Dora decide that it’s best for the monkey to die as he would simply be a burden to Dora and her family due to all the medications and therapy it would take to make him better.

Obama chops the monkey up for parts and talks about the need to “spread the health.”

It’s expected that Obama’s appearance on Dora will lift her sagging ratings but most expect that the ratings spike will be short lived and go back down shortly.

As for Obama, if this doesn’t get healthcare reform passed, he’s looking into a variety hour show co-hosted by K-Fed. Special guest stars to be named later.