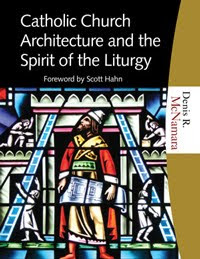 I mentioned a week ago about an exciting, an I dare say important, new book being published in November by CMR contributor Denis R. McNamara. For those of you who don’t know, Denis (DMac) is Assistant Director and Faculty Member at The Liturgical Institute located at Mundelein Seminary in the Archdiocese of Chicago. Denis has a B.A. in History of Art from Yale University and an M.Arch.H. and Ph.D. in Architectural History from the University of Virginia. And if all that was not impressive enough, he is also my brother in law.

Denis’ forthcoming book is entitled “Catholic Church Architecture and the Spirit of the Liturgy” and is to be published by Hillenbrand books. As a refresher, last time I mentioned that Dr. Scott Hahn has written the foreword for this book. Among other things he said that the book is:

“something we desperately need, something rare and great: at once an achievement of scholarship, a work of mystagogy, and an act of piety.”

With his Catholic Church Architecture and the Spirit of the Liturgy, Dr. Denis McNamara has made a most significant contribution to the theology of the Sacred Liturgy, in the line of the luminous writings on the subject by Pope Benedict XVI, both before and after his election to the See of Peter. Dr. McNamara argues convincingly and well that the lex aedificandi, that is, the norm of building in what pertains to churches and chapels, like the lex orandi or norm of praying, by its very nature, gives expression to the lex credendi or norm of faith itself. In other words, the building which we set apart for worship should, as much as is possible, express the reality of the union of heaven with earth which takes place when we “worship the Father in spirit and truth (Jn 4:23). Every element of a church or chapel should, in some way, point to the divine action, the action of Our Lord Jesus Christ, which is the source and strength of acts of sacred worship. Rightly, the Fathers of the Second Vatican Ecumenical Council reminded us that, in accord with the perennial tradition of the Church, “things pertaining to sacred worship should be truly worthy, becoming, and beautiful, signs and symbols of supernatural realities” (Sacrosanctum Concilium, no. 122). In truth, a truly beautiful church, no matter how simple or ornate it may be, evangelizes and catechizes us regarding the Mystery of Faith.

Among the many rich elements of Dr. McNamara’s profound and comprehensive study of Sacred Architecture is his most timely application of the “hermeneutic of continuity,” that is, the interpretation of Sacred Architecture in the light both of the roots of Christian worship in Jewish worship and of the organic development of Sacred Worship, down the Christian centuries. As his study makes clear, a church or chapel which has no relationship with the organic development of church building is a contradiction which betrays the very purpose for which it has been built. Dr. McNamara helps us to understand how a church or chapel is at one and the same time the House of God and the House of the Church. The encounter with God through sacred architecture, in fact, is an experience of our truest being as members of the Church, of the Mystical Body of Christ, on pilgrimage to the Heavenly Jerusalem. The entrance of a beautiful church is, as is often inscribed above it, the porta coeli, the door of heaven.

I wholeheartedly commend the work of Dr. McNamara to all who want to deepen their understanding of sacred architecture, who desire to be schooled in the Church’s lex aedificandi. In a particular way, it is my hope that his study will become a standard reference for seminarians and priests, and for all who have responsibility for the building and maintenance of churches and chapels. For every attentive reader, Catholic Church Architecture and the Spirit of the Liturgy will not fail to offer a most significant contribution to the life of faith and worship.

The Most Reverend Raymond L. Burke
Archbishop Emeritus of Saint Louis
Prefect of the Supreme Tribunal of the Apostolic Signatura
August 29, 2009 – Memorial of the Beheading of John the Baptist

The book can be pre-ordered at HERE.