The Cult of Reverse Victimology 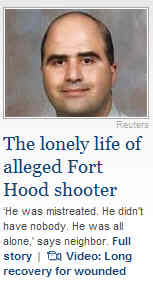 The cult of reverse victimology gets stranger every day. I wonder if in the last stages of the Roman Empire they wondered about the lonely life of the barbarian?

As we all know by Maj. Nidal Hasan murdered 13 people and injured scores more. Before the echoes of gunfire fade we have the President of the United States telling us not to jump to conclusions about Islam in between shout-outs to his buddies and contributors. Ditto Janet Napolitano at Homeland.

For emphasis about the wrongness of jumping to conclusions, let’s look at the words of Maj. Hasan’s former Imam.

Nidal Hassan [sic] is a hero. He is a man of conscience who could not bear living the contradiction of being a Muslim and serving in an army that is fighting against his own people. This is a contradiction that many Muslims brush aside and just pretend that it doesn’t exist. Any decent Muslim cannot live, understanding properly his duties towards his Creator and his fellow Muslims, and yet serve as a US soldier. The US is leading the war against terrorism which in reality is a war against Islam. Its army is directly invading two Muslim countries and indirectly occupying the rest through its stooges.

Nidal opened fire on soldiers who were on their way to be deployed to Iraq and Afghanistan. How can there be any dispute about the virtue of what he has done? In fact the only way a Muslim could Islamically justify serving as a soldier in the US army is if his intention is to follow the footsteps of men like Nidal.

The heroic act of brother Nidal also shows the dilemma of the Muslim American community. Increasingly they are being cornered into taking stances that would either make them betray Islam or betray their nation. Many amongst them are choosing the former. The Muslim organizations in America came out in a pitiful chorus condemning Nidal’s operation.The fact that fighting against the US army is an Islamic duty today cannot be disputed. No scholar with a grain of Islamic knowledge can defy the clear cut proofs that Muslims today have the right -rather the duty- to fight against American tyranny. Nidal has killed soldiers who were about to be deployed to Iraq and Afghanistan in order to kill Muslims. The American Muslims who condemned his actions have committed treason against the Muslim Ummah and have fallen into hypocrisy.

MSNBC, for its part in the non conclusion jumping art of reverse victimology, offered this particular headline this weekend. “The lonely life of the alleged Fort Hood Shooter” Keep in mind that the victims of Maj. Hasan have not even been buried yet.

After the events at Fort Hood last week, the reactions as seen above, and the passing of Socialized healthcare in the House, it is getting increasingly difficult to make an argument that our civilization is not over.

Maybe someday someone will write a headline wondering about the lonely life of the patriot at the end of the American empire, but I doubt it.