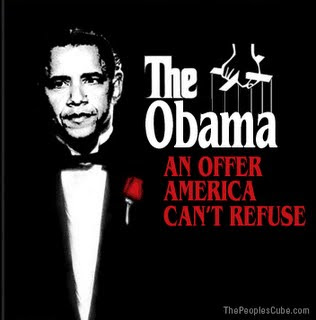 Nice country you got there. It’d be a shame if something happened to it.

That’s what Barack Obama is saying to Congress right now by threatening them with damaging the country unless they do exactly what he says, according to Fox News.

The Obama administration is warning Congress that if it doesn’t move to regulate greenhouse gases, the Environmental Protection Agency will take a “command-and-control” role over the process in a way that could hurt business.

The warning, from a top White House economic official who spoke Tuesday on condition of anonymity, came on the eve of EPA Administrator Lisa Jackson’s address to the international conference on climate change in Copenhagen, Denmark.

Uhm. Doesn’t the EPA work for the White House?

So put into mob language, Obama is essentially saying “I’d hate to find out that one of my friends or associates did something…untoward… to you because of the disrespect you have shown to me. For you know me, I am a peace loving man, unfortunately I cannot say the same for some of my friends in the EPA.”

So in short, Obama is threatening to hurt the country unless he gets his way. That’s our President’s way. That’s the Chicago way.