Say What You Want – This Is Funny 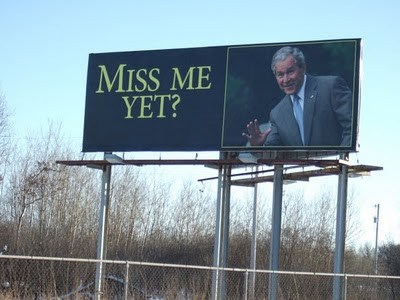 Instapundit give us this story and apparently an eye witness account that this is NOT a photoshop job. Say what you want. That is funny.

NPR says it is real:

Internet chatter had led to speculation that it might be an urban myth — nothing more than clever digital trickery spreading via the Web.

But our friend Bob Collins at Minnesota Public Radio assures us he’s seen it with his own eyes:

There is a billboard along I-35 near Wyoming, Minn., with a huge photo of former president George W. Bush and this question: “Miss Me Yet?”

It takes a very “special” kind of President to make the Bush years seem like the good ol’ days. Thanks Barack.

Now the hunt is on to see who did it.

‘Miss Me Yet?’ Billboard With Photo of George Bush is Real
by burghnews