I Still Hate the Cowboys But… 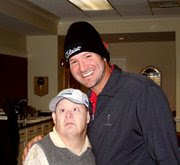 Almost every week there’s a story about some pro athlete doing some either really stupid or really illegal or both. But this story about Tony Romo meeting a 60 year old fan with Downs Syndrome is pretty awesome and almost makes me like Tony Romo. Almost.

(Robbie) Assey, who is 60 years old and has Down syndrome, lives at Sandpiper Assisted Living in Mount Pleasant. He has a brother, Tim, and sister, Jane, who both live in Mount Pleasant. Another brother, Jim, lives in Columbia. The three siblings rotate weekends “having fun with Robbie.” Tim said Robbie is a sports nut who enjoys the Dallas Cowboys, the South Carolina Gamecocks and playing golf.

Dallas Cowboys quarterback Tony Romo, who was in Charleston last week, spent some time with one of his biggest fans, Robbie Assey.

The genesis of his meeting with Romo goes back several months when Tim took Robbie to Bulls Bay Golf Club for an afternoon of golf that included Bill Smunk, a past winner of both the S.C. Amateur and S.C. Senior Amateur.

“When I met Robbie, he had a Dallas Cowboys hat on, so I asked if he was a Cowboys fan,” Smunk recalled. “His answer was ‘Tony Romo, No. 9, 318 yards.’ He knew exactly what Tony Romo had done the weekend before. I asked if he liked Tony Romo and he said, ‘I love Tony Romo.’ I put that in the back of my mind, and thought if Tony played in the Azalea this year, maybe we could get an autographed hat or something.”

On Saturday morning, Smunk handed a hat to tournament chairman David Humphreys and asked if he could secure an autograph. Later that day as Smunk prepared to leave the course, he saw Robbie and Jim walking across the parking lot and handed the hat to Robbie, who proudly popped it onto his head. Romo had already finished his round, but Smunk told them if they waited near the outside staircase at the Country Club of Charleston, Romo might come by on his way out.

Minutes later, Humphreys walked up and spotted Robbie with his new hat.

“I asked, ‘Is your name Robbie?’ Then I told him to come with me. I opened the door to the card room and said, ‘Why don’t you go in there and say hello to Tony Romo?’ He goes in there and grabs Tony around the legs and starts hugging him and won’t turn loose. I think he was crying. I know the room got misty-eyed,” Humphreys said. “It was one of the most heartwarming things I’ve ever been through. There wasn’t a dry eye in there as far as I could tell. It was just a happy time.”

Tony, who was having lunch with his father and some friends, invited Robbie and Jim to sit down and join them while they had lunch. For the next 30 minutes, Tony and Robbie talked football and golf, with Robbie offering Tony a few football tips and recounting some Cowboys history.

“He tells Robbie that the Cowboys are going to have a better year next year,” Jim said, “And Rob jumps up and shows him how you throw the ball. Tony is a very young man, but he’s a super human being because he took time with Robbie. He is a gracious gentleman. They were finishing up and he told Rob, ‘I’ve got to have another hug.’ He got up and gave him another hug and then Tony asked him to give his dad a hug, too. So he had hugs all around. It’s really hard to imagine how it could have been any better, particularly from our side. It was a once-in-a-lifetime deal.”