SSPX To Williamson: Shut Up For Real This Time 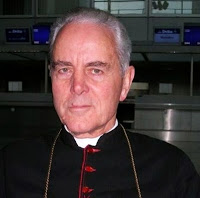 The secretary general of the Saint Pius X Society has ordered Bishop Richard Williamson to shut up for real this time. A year or so ago when Bishop Williamson made embarrasing worldwide headlines questioning the holocaust, the SSPX prohibited him from speaking on the subject anymore.

Now in advance of his trial in Germany for holocaust denial, the SSPX is telling to stop talking and writing, period.

BERLIN – A breakaway ultra-conservative Catholic group ordered British bishop Richard Williamson not to speak in public or testify at his trial for denying the Holocaust, German media reported Thursday.

The secretary general of the Saint Pius X Society, Father Christian Thouvenot, wrote to Williamson, a leading member of the group, telling him to stop giving interviews or communicating publicly, according to the daily Tagesspiegel, which obtained a copy of the letter.

Williamson’s lawyer, Matthias Lossman, on Wednesday confirmed that the bishop, who lives in London, would not attend his trial which opens in the southern German city of Regensburg on Friday

The society told Williamson to “stop communicating by Internet, be it by blog, forum or via his web page,” the Tagesspiegel said.

He has also been ordered not to give interviews on general issues, and only to speak on matters of faith after obtaining permission from the society.

While the move is also in the proper self-interest of the SSPX — theological discussions between the Vatican and the SSPX have been ongoing for months now and have been handled in a quiet and discreet manner and any wayward comment might derail the talks–I applaud the SSPX for the wise move.