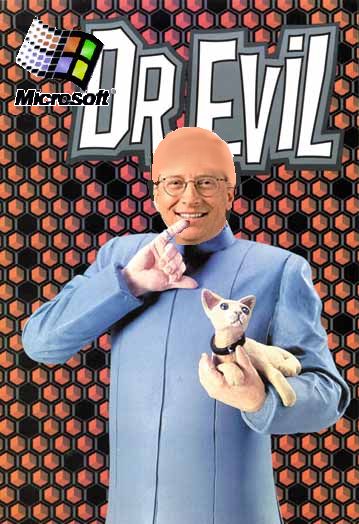 The Times Online has a potentially disturbing story:

The first trials of controversial sunshielding technology are being planned after the United Nations failed to secure agreement on cutting greenhouse gases.

Bill Gates, the Microsoft billionaire, is funding research into machines to suck up ten tonnes of seawater every second and spray it upwards. This would seed vast banks of white clouds to reflect the Sun’s rays away from Earth.

The British and American scientists involved do not intend to wait for international rules on technology that deliberately alters the climate. They believe that the weak outcome of December’s climate summit in Copenhagen means that emissions will continue to rise unchecked and that the world urgently needs an alternative strategy to protect itself from global warming.

So world governments are seen as weak to deal with a non-existent problem so one man is going to go ahead and shield the Earth from the Sun? What could go wrong?

What? This is the guy who came up with Windows?! And nothing ever goes wrong with Windows.