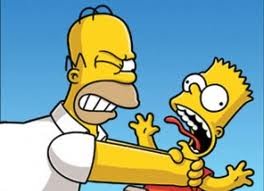 This drives me crazy for two reasons.

I haven’t seen the actual piece but L’Osservatore Romano seems to have declared that Homer Simpson is Catholic. I know. I’m getting this from the MSM so it’s possible it’s being misreported but the folks at that newspaper do seem to write some crazy things sometimes. This brings me to my second reason this kind of thing drives me crazy. The media is predictably running reports saying that THE VATICAN has decreed the Simpson’s to be Catholic.

The way the mainstream media is portraying this you’d think the Vatican had decreed this with the same importance as if the Pope had infallibly stated this after years of studies and councils.

The official Vatican newspaper has declared that beer-swilling, doughnut-loving Homer Simpson and son Bart are Catholics — and what’s more, it says that parents should not be afraid to let their children watch “the adventures of the little guys in yellow.”

“Few people know it, and he does everything to hide it. But it’s true: Homer J. Simpson is Catholic”, the Osservatore Romano newspaper said in an article on Sunday headlined “Homer and Bart are Catholics.”

The newspaper cited a study by a Jesuit priest of a 2005 episode of the show called “The Father, the Son and the Holy Guest Star”. That study concludes that “The Simpsons” is “among the few TV programs for kids in which Christian faith, religion and questions about God are recurrent themes.”

The Simpsons pray before meals, and “in its own way, believes in the beyond,” the newspaper quoted the Jesuit study as saying.

This is just one of those ridiculous stories that the media uses to mock the Church. And sometimes the writers at L’Osservatore Romano help them.