Awesome. Ferrigno and Seagal at the Border 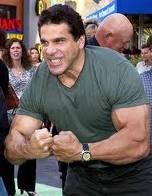 Big Hollywood has the story that Lou freakin’ Ferrigno and Steven Seagal have joined Sheriff Joe Arpaio in cracking down on illegal immigration. No matter what you think about enforcing immigration laws you’ve got to admit that this may be the most awesome story ever.

You want to see people running for the Mexican border, paint ol’ Lou Ferrigno green and have him running around and snarling around the border. They’ll be crossing the border and washing their dirtied shorts in the Rio Grande.

Or you know what might actually work better is just have Steven Seagal announce he’s going to start making movies again. That might send people heading for the border a lot quicker. I might be with them.