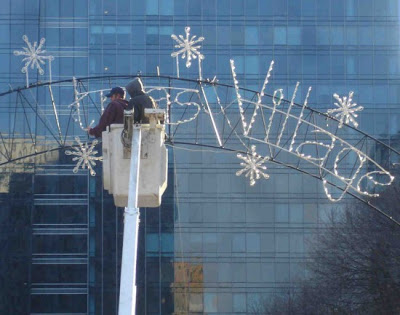 The war on Christmas continues.

This is just so ridiculous. In the picture above the workmen in Philadelphia are tearing down the word “Christmas” and putting up “Holiday” instead.

It’s that season again, which means that for the third year in a row, the German Christmas Village has set up a cozy collection of wooden booths and tree vendors in Dilworth Plaza on the west side of City Hall.

But a few shoppers noticed something amiss yesterday on the tall metal archways signaling the entrances to the shops. The archways had just one word on top – “Village.”

It turns out that the letters spelling “Christmas” were removed yesterday afternoon from the archways on the north and west sides of the plaza, at the request of Managing Director Richard Negrin. They will be replaced with the word “Holiday.”

Read the rest at Weasel Zippers>>>

America has lost its mind and the city of brotherly love no longer loves the baby Jesus.

Update: Mayor Nutter announced that the word “Christmas” will go back up. A win for the good guys.