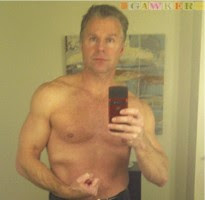 A GOP Congressman is resigning but I’m not sure if the reason is infidelity or sheer cheeseballery.The Blaze reports:

According to Gawker, the now ex-congressman used Craiglist’s “Women Seeking Men” forum to advertise himself as a divorced “lobbyist” and “fit fun classy guy.”

On Friday, Jan. 14, Lee reportedly sent images of himself to a supposedly single 34-year-old woman looking a “financially & emotionally secure” man. After exchanged flirtatious emails, Lee forwarded a topless photo of himself posing with flexing muscles.

Here’s the deal. Anyone who sends a pic of themselves like this and sends it out online and is not named David Hasselhoff should be shunned from polite society. For a looooooong time.

The worst part is that he’s cheating on his wife. But the second worst part is how he’s flexing in his little self portrait. Sheer cheeseballery. What kind of woman would look at that and say, “That man posing like Jack Lalanne in his hotel bathroom is the man for me?”

Exit Note to media: Congressman cheat on their spouses all the time. If there are pictures like this of Barney Frank please don’t publish them. We already know he’s up to some weird stuff, we don’t need to see it. We don’t need to see any of it. None.