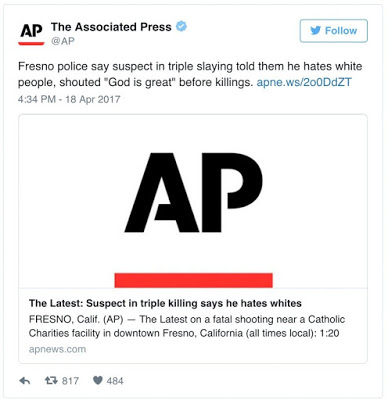 These are not people who are interested in reporting facts. They are interested in spinning you; protecting you from information that might lead you to a conclusion that they don’t like. The Associated Press does not trust you with truth.

This is horrible. The Associated Press tweeted that the black shooter in Fresno, California who killed three white people shouted “God is great” before going on his killing spree.

The truth is that Kori Ali Muhammad, 39, who killed three people in less than two minutes hate spree yelled out “Allahu Akhbar.” So the AP went ahead and just translated that for ya. Y’know, because you’ve never heard anyone say those words before and you don’t speak Arabic or something.