It’s Time to Drive the Enemedia out of Existence 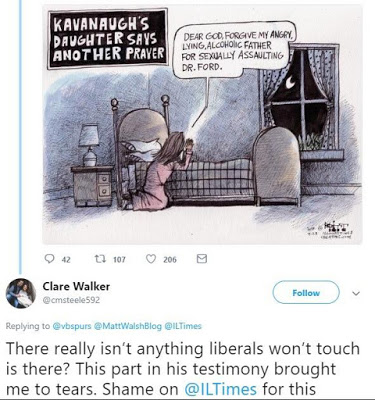 This just get worse and worse. The left will stop at nothing.

USA Today publishes an opinion piece suggesting Brett Kavanaugh be prohibited from coaching girls basketball, insinuating that he is a pedophile.

It is time to drive the enemedia out of existence.

Check out this horrible cartoon from the Illinois Times:

I’m not linking to any of these people because I’m not allowing them to monetize their asshattery. By clicking through we weaponize them.

The media is hell bent on delivering unto you a socialist utopia where they and their elitist friends make all the decisions. Folks, this is the left. This is what they do everywhere they go.

You know, everyone always talks about how guys like Stalin threatened and controlled the press. But I wonder, how many journalists were perfectly willing to go along with the massive destruction of humanity because it promised to deliver a utopia? How many went along because they got to feel like someone on the inside?

You might recall Walter Duranty, the winner of the 1932 Pulitzer prize in journalism for his dispatches from the Soviet Union. While famine spread causing the death of millions, he wrote in the pages of The New York Times that “any report of a famine in Russia is today an exaggeration or malignant propaganda”, and that “there is no actual starvation or deaths from starvation, but there is widespread mortality from diseases due to malnutrition.”

To be clear, Duranty was very aware of the famine and wrote in private correspondence that the population of Ukraine and Lower Volga had “decreased” by six to seven million, adding “But to put it brutally you can’t make an omelet without breaking eggs.”

In August 1933, Cardinal Theodor Innitzer of Vienna called for relief efforts, shocking the world by stating that the Ukrainian famine was claiming lives “likely… numbered… by the millions” and driving those still alive to infanticide and cannibalism.

The New York Times, August 20, 1933, reported Innitzer’s charge and published an official Soviet denial: “in the Soviet Union we have neither cannibals nor cardinals”. The next day, the Times added Duranty’s own denial.

Mind you, the Pulitzer was never retracted.

And it is the same right now. The utopian dream in America today rests on the right to kill the unborn. It’s is their baseline, their holiest of holies. And if they have to destroy one man to do it, that’s nothing. It’s just one broken egg.