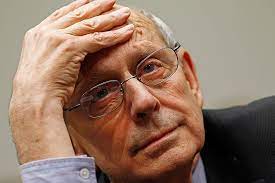 The left desperately wants Justice Steven Breyer to retire. But those in power are too wimpy to actually say it out loud.

They don’t want what happened to Ruth Vader Ginsburg’s seat to happen to Breyer’s. Ginsburg, despite pressure, refused to step down during President Obama’s second term. She thought it would be nice to allow Hillary, a woman, to appoint her successor. Well…Hillary didn’t happen and Trump put Amy Coney Barrett on the bench much to the chagrin of the left.

The left doesn’t want anything like this to happen again and is now pushing for octogenarian Breyer to step down. The Politico quotes an unnamed Democrat Senator saying he wishes Breyer would retire so they could ensure that the Democrats get to nominate his successor.

Brian Fallon, the executive director of liberal judicial group Demand Justice, said “people need to stop being sheepish about this.”

“The longer that goes by without word from Breyer that he intends to step down at the end of this term, the more reckless it is,” Fallon said.

There’s a bit or irony here in that how on Earth could Joe Biden, who is clearly suffering from dementia, tell someone else that it’s time to hang it up. Maybe they’ll have Kamala sit them both down and tell them it’s time at the same time. They’ll both get watches and plaques and be escorted off the property by security.

Hmmmm. Seems to me that they’re a bit worried a little bit about what might happen in 2022? 2024? The clock is ticking…

This will be interesting.