Fauci: You Can Get Your Freedom Back but Only If You Do Exactly What We Say. 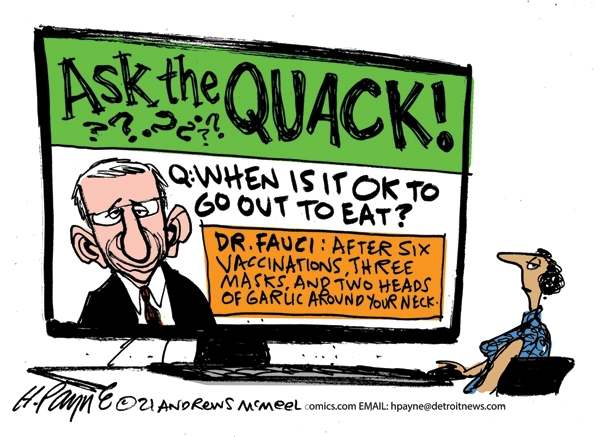 I’m pretty sure that at least a few of the four horsemen of the apocalypse will be wearing lab coats.

I’m sure it’s occurred to all of us by now that they’re not interested in normal. They find normal offensive. Isn’t that the entire point of leftism. Without saying they hate America they insist that they love what it could be. Or perhaps they say they love the promise of America. Their goal is to refashion the country. To transform it. They actually say these words.

The left is against normal. Their intention is to drag us kicking and screaming into their utopia and make you forget freedom and normalcy.

Dr. Fauci said in an interview that if everyone just does what he says and puts the vaccine in their arm, then everything may begin approaching normal by next year this time. This man is insane.

During an interview on ABC’s “This Week,” host George Stephanopoulos asked Fauci what life in America will be like on Mother’s Day next year.

“Well, George, I hope that next Mother’s Day we’re going to see a dramatic difference than what we’re seeing right now,” Fauci said. “I believe that we will be about as close to back to normal as we can.”

However, Fauci stipulated there are “conditions to that.”

“We’ve got to make sure that we get the overwhelming proportion of the population vaccinated,” Fauci said. “When that happens, the virus doesn’t really have any place to go. There aren’t a lot of vulnerable people around. And where there are not a lot of vulnerable people around, you’re not going to see a surge. You’re not going to see the kinds of numbers we see now.”

“That being the case, I think we can approach what we use to remember as normal before all of this tragedy happened,” he added.

That’s what they’re hoping you’ll accept. That’s the new normal. The shocking thing is not that they’re trying it. The thing that shocks me is how many people are accepting it.

I honestly don’t see how our country gets past this divide.

Update: I knew a guy in law enforcement. He was pretty highly ranked. Decent guy. But he used to do this thing. He’d offer you a piece of gum and if you said no, he’d insist and if you said no again he’d only insist more. He wasn’t being nice. He was testing you. Could you be bullied into doing something you didn’t want to do? It wasn’t about the gum. It was a test.

If you took it he knew he could dominate you. That’s what is was about.

I think this vaccine is the gum.