Christian Song Gets Cancelled Because…Well, I’m Not Really Sure Why. 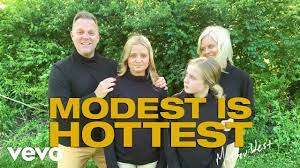 A Christian song in which a Dad explains to his daughters that “modest is hottest” is being cancelled.

Yes, in a time when pop stars monetize sexuality in the most perverse ways, a Christian artist, Matthew West, is forced to apologize for a cute little video in which he urges his daughters to dress modestly because it ‘perpetuates some harmful ideas’

Yahoo:
A new song from contemporary Christian singer Matthew West drew ire from TikTok users and their parents after it went viral.

The song “Modest is Hottest” and its accompanying music video were released on June 18. The music video has been wiped from the internet following backlash, but the song has continued to spread on social media.

In the original video, West gives his two daughters a lecture about modesty.

“The boys are coming round ’cause you’re beautiful. And it’s all your mother’s fault,” he sang. “Modest is hottest, the latest fashion trend is a little more Amish, a little less Kardashian. What the boys really love is a turtleneck and a sensible pair of slacks. Honey, modest is hottest, sincerely, your dad.”

West mentioned TikTok in the song, saying that if his daughters got caught “doing dances on the TikTok in a crop top,” they would be “grounded ’till the world stops.”

According to today.com, West wrote in a now-deleted Instagram post that the song was meant to be a “light-hearted take on an age-old struggle.” Now, the only trace of his song on his social media accounts is a message just shy of an apology.

“I wrote a song poking fun at myself for being an over-protective dad, and my family thought it was funny,” he wrote. “The song was created as satire, and I realize that some people did not receive it as it was intended.”

Prior to its deletion from most platforms, “Modest Is Hottest” went viral on TikTok as a sound under the name “Modesty culture is toxic.”

“My issue with ‘Modest Is Hottest’ is that it implies that women’s bodies are for men to look at,” user @roanmclean wrote in a post that now has nearly 2 million views.

She clarified in the comments of her post that modesty as a choice, to her, is not toxic.

“Creepy this man is telling his daughters what he thinks is a ‘hot’ way to dress,” she continued.

“Can we talk about how this song is a dad addressing his daughters and … telling them to do what he thinks is hot?” she wrote.”

What? Mind you the song WAP was #1 for weeks. Miley Cyrus has been naked in her videos. But this…THIS is the problem.

As a father of four daughters I can relate to this song and Matthew West’s concerns. Here’s the thing. The only people attacking this are hate filled keyboard junkies. And the news mistakes this for the real world. In no world should this video have been removed. And there should be no apology. Insanity reigns.