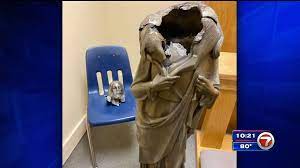 OK. I don’t want to be the site that just lists anti-Catholic sentiments, graffiti, and vandalizations but I think it’s becoming obvious that it’s on the rise. I suspect it’s only going to get worse in the near future.

And you thought they’d stop after pulling down statues of America’s Founding Fathers.

Breitbart reports that a pair of Jesus statues were vandalized at a Catholic church in Miami Shores roughly one month apart.

The Archdiocese of Miami says the statues stand on sacred ground and they are having trouble understanding why anyone would do this. The first of the two incidents of vandalism on statues of Jesus was a one in front of St. Martha’s Church, which was left without a hand. […] The second and most recent desecration happened on September 29th. A statue in front of the parish office was left headless and handless.

“It sends a sad message. It sends a strong message. Perhaps that it is an anti-Christ issue,” said Ross Augusta, who serves as a spokesperson for the Archdiocese of Miami. “We found the head over the fence. It was thrown on another piece of property.”

The Miami Shores Police Department is in possession of at least one video that shows one of the alleged attacks.

“In that video, that’s the only video that exists, you can see a person throwing whether or not it was a large rock, or using a hammer, and you can see them going at the hand and finally the hand is knocked off,” Augusta stated.”