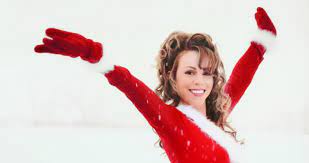 I don’t always look to pop stars for religious clarification but when I do I look to Mariah Carey.

The Blaze: Popstar Mariah Carey has given her Christmas crown to another woman she feels is better suited to be called the “Queen of Christmas.”

Carey told BBC radio host Zoe Ball that she did not come up with the title “Queen of Christmas” and feels that the moniker belongs to the virgin Mary, the mother of Christ.

“Can I just say that I did not create the title or the moniker ‘Queen of Christmas,’” Carey explained. “I did not do that. That was other people, and I just want to humbly say that I don’t consider myself that,” Carey said on “The Zoe Ball Breakfast Show,” which aired on BBC 2 Friday.

Carey elaborated, telling listeners that she did not deserve to be called by the title but that Mary, the mother of Christ, was the real “Queen of Christmas.” Carey’s comments came after Ball lightheartedly introduced the singer to listeners by the nickname given to her by fans. The popstar downplayed her success humbly, suggesting she was someone who has been blessed to write and perform many Christmas songs.

“And let’s face it, you know, everybody’s faith is what it is. But to me, Mary is the Queen of Christmas,” she told BBC listeners Friday.

That’s pretty nice to hear. Someone unafraid to do a little preaching’ publicly. Good for her. I had her in a looney tunes crazy file Iin my mind which is where I keep most celebrities but at least she has some reverence. Makes me feel good when I’ll hear her Christmas songs played over and over and over. I won’t roll my eyes quite so loudly.