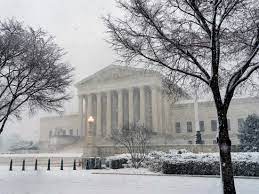 The US Supreme Court issued a number of decisions today. Not among them was their decision on the vaccine mandate.

Never mind that the entire country is waiting on this decision. Never mind that thousands of companies are in limbo wondering if they should enforce this mandate that went into effect this week but they’re unsure how the Court is going to rule. Never mind that there are millions of people whose jobs are on the line because they don’t want to put an experimental vaccine into their bodies but they also have to support their families.

Their silence is despicable. This is politics.

I understand they’re giving both sides time to write and rewrite their concurrences and dissents. But this is THE most important issue going right now. For the court to continue waiting as the mandate goes into effect is unconscionable.

I was on SCOTUS blog this morning and there is tons of confusion and disappointment.

“Clearly nice people on this court who have never run a business or made a payroll of any type. This is unbelieve this was not the 100% focus of this court after oral arguments.

This has serious repercussions without some clarity. Businesses cannot simply start a mandatory testing program for 1000’s of employees overnight. It takes planning and many businesses are waiting for a decision.”

Judicial malpractice! How hard is it for them to announce they will have a decision on the vax mandates on a certain date?

And then my pithy comment: The Supreme Court sucks.